Crumpets are essentially similar to small pancakes or what the Americans call flapjacks. While it was a British invention, we all grew up having crumpets for a special weekend or holiday breakfast here in South Africa.

It is generally served with butter and syrup for breakfast, or with ice cream and chocolate sauce as a dessert.

Method
Melt butter
Beat the eggs and sugar together. Add the melted butter and 1 cup of milk.
Sift together the flour, baking powder and salt and add to the egg mixture.
Whisk together and add the remaining milk to form a smooth batter.
Drop 30 ml of sunflower oil in a non-stick frying pan and heat on medium (I generally regulate the stove between mark 3 and 4 out of 6)
Once the pan is hot drop spoonfuls of the batter into the pan.
You don’t want to make them too big as they take longer to cook through. About 2 tablespoonfuls at a time should be perfect.
Cook on one side and when air bubbles appear, turn and cook on the other side until golden brown.

The recipe makes about 25 to 30 crumpets.

We served ours with slices of melon and banana. The kids also liked it a bit of grated cheese and golden syrup. Some berry compote and a dollop of fresh cream would also be amazing. A few weeks ago we visited the Fourways Farmers market, curious to see and sample some fresh local produce and home made treats.

Victoire was looking for cardamom pods for some time and as luck would have it, managed to not only find a vendor that had cardamom, but also a smörgåsbord of other fresh herbs, spices and tidbits for our cooking endeavours. He even made up some barbeque spice for us. Watch out though, if you don’t pay close attention you’ll end up with some really hot spices and a huge dent in your pocket.

Inspired by the cardamom find, I happened to recall a recipe for white chocolate cardamom mousse from Nigel Slater’s Real Food cookbook – something I wanted to try for a long time. So this weekend, I finally got all the ingredients together for the decadent dessert.

Check out this quick Vine video of me whipping up the white chocolate cardamom mousse.

Read more about this recipe here.

With dessert sorted, I decided to continue on the fragrant Asian theme and make a Thai chicken curry for a change.

This one is very simple and is quite adaptable to whatever vegetables you have in your fridge.

The dish turned out deliciously fragrant with just a hint of heat. The family gobbled it all up with no left-overs for a snack or work lunch. That to me is a sign of a successful dish.

We ended the meal off with the white chocolate cardamom mousse – a very rich, velvety finish to a delicious meal. This is one of those incredibly easy recipes and is always a winner with friends and family. You can’t go wrong with chocolate right?

Our Mothers’ Day tea on Sunday turned into lunch at short notice, and I was tasked with bringing dessert! I’m one of those people who prefer to bake something homemade than buy, but I’m not ashamed to resort to a Woolies alternative if pressed! And believe me, it does not take much to foil my well-intentioned baking plans, being four months pregnant and with an active one year old running around. So I had to come up with a good, easy, recipe quickly. Thankfully I had spotted a delicious-looking recipe on one of my favourite foodie blogs, The Gorgeous Gourmet, a few days previously, so this was a great excuse to try it!

I made the Chocolate fudge cake with caramel icing, go check out the recipe and bookmark it, you’ll thank me later :)  The only adaptations I made were to use Decaf plunger coffee (for the kids’ and my sake), and I added halved strawberries in addition to the chopped Rolo, who can argue with strawberries and chocolate?

I will spare you the drama I went through in baking this cake, too much to mention! None of it relating to the recipe at least! I will say that when using spring form cake tins you should make sure they are airtight, or line with baking paper for good measure, and nothing will change the flavour of even slightly rancid butter, so always make sure you have enough fresh butter and check the butter before you start, especially for the icing…

Yip, I had to make the icing twice… 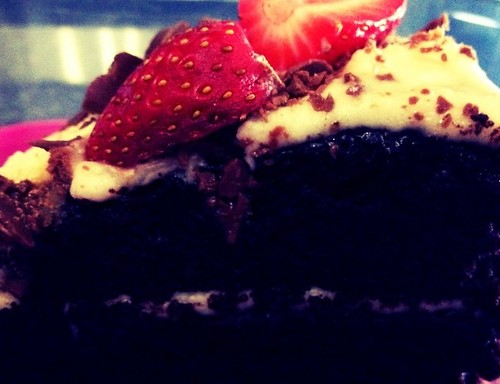 The cake was moist and gooey around the outside, pure bliss. The caramel icing, however, was not a hit. It was very sugary-sweet and not caramel-y at all – perhaps it was something I did, I’m not sure… Thankfully Candice has promised to have a look at the recipe to make it more caramel-y for me, if so, this will be my go-to cake for a very long time.

If you would like to try out other icings you could do a chocolate ganache or sandwich the layers with white chocolate mousse and dust the top with cocoa powder/icing sugar. Let me know if you find a winning combination! 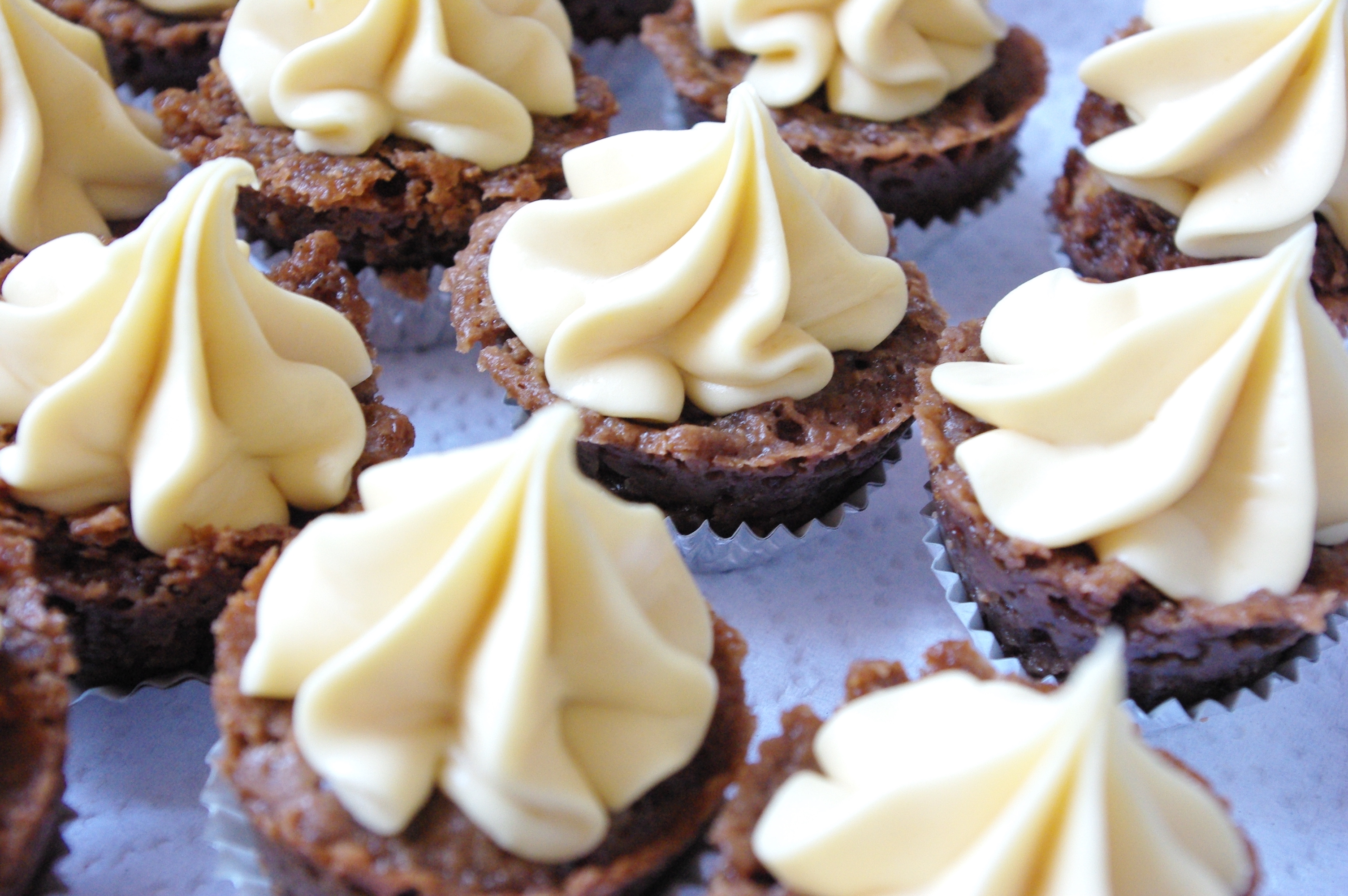 I have been a huge fan of The Cupcake Lady‘s cupcakes ever since I tried a couple at Gina‘s birthday party last year. They really are “heaven in paper cups”! Imagine my joy when I saw that there was an opportunity to be a beta tester for one of her new creations… Doubly so since Nico’s birthday was approaching and I had not yet thought of a birthday gift, nor had the time to bake anything for his office. Perfect.

The inspiration for this beta test was chocolate, how divine. It was not easy to choose just one item, but those were the rules so…

ALL of the goodies sounded delicious, but since Nico and I have been on a quest for the perfect chocolate brownie I knew I had to go with that one.

I received 18 brownie bites, and tasted about 3 or 4 of them for this review, the rest went to Nico’s office.

Ok, so on to the review of the brownie bites…

These brownies are delicious, and ultra sweet. They are very close to the “perfect” brownie Nico and I have been looking for with a fudgy consistency rather than a cakey one. The brownie is nicely chocolatey, a little crumbly, and contains nuts – walnuts and pecan I think. Add to that a gooey Rolo caramel center, yum. The cream cheese frosting adds a hint of sour to balance the sweet of the brownie, however I’m not sure it adds enough contrast to justify its presence. These bites could easily be served without it. Being bites they are quite tiny, I felt that I had hardly savoured the full flavour of the bite before it was gone. I would suggest making them slightly bigger, perhaps a mini-bar instead.

Similar feedback was received from Nico’s colleagues. The bites were described as “fantastic”, “a foodgasm”, “very rich rather than sweet”, and “it is absolutely awful that there are so few of them”. As for the size, the general consensus was that the brownie should be bigger – about three bites in the shape of a bar.

So there you have it! What a treat to be able to trial these delicious desserts. I really hope that I’ll get another chance to try some more of The Cupcake Lady’s creations in the future.

Who can resist the challenge of making your own nougat? Certainly not me! Well, although this is not a complicated recipe, it proved quite stressful, mostly my worrying about whether I had done everything correctly. In the end everything worked out fine – even though the nougat did lose its shape, melting into a mound of chewyness, it was delicious… and that’s all that counts! 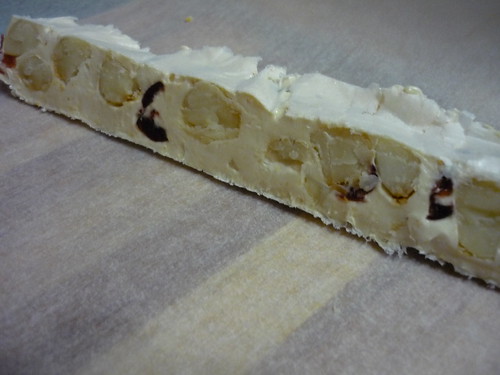 Lessons learnt:
This recipe calls for several unusual ingredients and utensils, the rice paper you should find at a Chinese store, liquid glucose is not stocked by the supermarkets but I found some at a small baking shop, and a sugar thermometer is quite essential for a variety of edible goodies including sweets and jams.
Make sure that you get the correct rice paper! You will need the thinnest paper you can find, usually found in rectangular sheets. The thick rice paper used for spring rolls is no good for this sweet…
The nougat turned out to be very sticky making it difficult to cut and almost impossible to get out of the tin. I would suggest lining the sides of the pan with rice paper as well to assist with the removal of the sweet.

Method:
Place the sugar, glucose and honey in a saucepan over a medium heat and stir until the sugar has dissolved. Do not allow the mixture to boil. Keep brushing the sides of the pan with extra water to prevent any sugar crystals from clinging.
When the sugar has completely dissolved, increase the heat and bring the syrup to a rapid boil until 140 degrees Celsius is reached on a sugar thermometer.
Line the base of an 18 x 28 cm rectangular cake tin with rice paper (remember the sides as well as the base!)
Place the egg whites and cream of tartar in the bowl of an electric mixer and whisk until soft peaks form. Add the sugar mixture in a steady stream until it is incorporated and continue beating for about 5 minutes until the mixture is slightly cooled and thickened. Add the macadamia nuts and cranberries, whisking them in by hand.
Pour the mixture onto the rice paper and press gently with a spoon to flatten. Cover with another piece of rice paper and allow to set for a few hours before cutting.
Cut into desired shapes, using a very sharp knife. Dip each piece of nougat in cornflour to give it a very light coating before wrapping in parchment paper or cellophane wrapping. 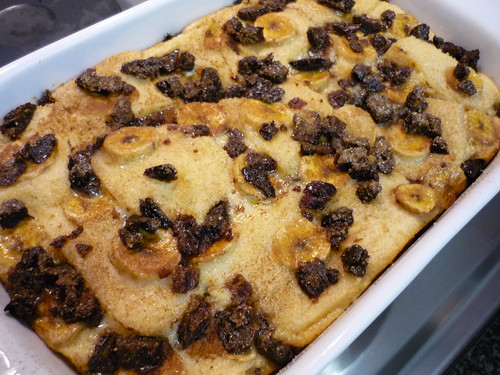 Winter is here, and so are all the cravings for warm comfort food. Bread pudding is fantastic for satisfying that craving, and you get to use up some of the food you were about to throw out… just before it gets a life of its own, mind you!

I got my recipe out of the May 2009 Fresh Living magazine (Issue 15), and adapted it according to what we had available.

Preheat oven to 180 degrees Celsius.
Lightly grease a 1.5l ovenproof dish.
Butter bread on both sides and cut into quarters.
Lay bread pieces in the dish and scatter with bananas and dates.
Whisk the eggs with the milk, castor sugar and vanilla essence and pour over the bread evenly.
Sprinkle with the brown sugar and cinnamon.
Bake for 35 – 40 minutes or until the custard is golden and set. (I baked the pudding with both the top and bottom elements on and let it cook for about 45 minutes until the bottom was slightly overcooked, dark brown and sticky. This makes it slightly toffee-like and chewy).

I could’ve even left the pudding in slighly longer to give it more of a caramelised edge. The dates were also deliciously chewy.

Serve with custard (ultramel in my case) or cream (as suggested in the original recipe).

As you may have noticed this made a huge dish of pudding (it is supposed to serve 6), far too much for the two of us to complete, even after 2 days! I would suggest halving or even quartering the recipe for 2 people.